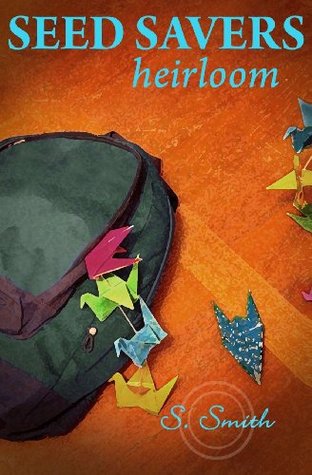 In a grim future where food comes in packets and gardening is illegal . . .

Brother and sister, Clare and Dante, have escaped to Canada and are sent to live with the Woods, a wonderful couple who run an apple orchard. There they attend classes taught by the Garden Guardians, learning how to plant and cultivate real food.

They are also taught the history behind the laws that led to the modern type of “food”- unappetizing packets with names like “carbos” and “protein”. They learn about Nipungyo, a multi-national ag-biotech corporation which gained power through the development of pesticides and genetically modified organisms (GMOs). As the corporation grew in strength, it began prosecuting farmers and infiltrating the government, becoming inextricably linked with GRIM -the government agency that enforces anti-gardening laws.

Meanwhile, back in the States, their friend Lilly has run away from home. She makes her way south to Florida, hoping from there to find a way to Cuba, where she has heard her father is being imprisoned for leading a resistance against GRIM. Along the way, she must learn to gain strength from her own abilities, discovering who she is and who her true friends really are.

I found the basis for this book of the book extremely fascinating. A wonderful book centered on faith, friendship, and independence, it’s also a stern warning for people to wake up and pay attention to what’s going on today with our food. I think this is  probably the most plausible premise for a dystopian novel I have read yet, (the parallels between Nipungyo and Monsanto are undeniable) and got so absorbed into the story that I read it all in one sitting.

Heirloom is a fantastic book written for MG/YA (though I’m an adult and thoroughly enjoyed it!). It has a lot to teach kids about being strong, the importance of friendships, and standing up for what’s right. It even teaches you a little bit about gardening (how cool is that?). If you are looking for a gripping dystopian with a twist, look no further. Highly recommended!

I received a free copy of this book through Goodreads First Reads in exchange for an honest review.

S. Smith grew up on a farm with a tremendously large garden. Though she lives in the city now, her love of growing vegetables and flowers endures. Her first published series, Seed Savers, was born from this desire to plant each spring. A licensed ESL (English as a Second Language) teacher, Ms. Smith has enjoyed teaching students from around the world. She gardens and writes at her home in the beautiful and green Pacific Northwest.